* There are four roles, so when playing with less than four people, the remaining roles can be divided.

Aim of the game

The aim of Dobbly's Island is to leave the sinking island with four players. This is only possible when each player has collected the key in their colour and when the bridges to the submarine has been activated. Is both done? Then the player can go to the submarine, which only leaves the island when everyone is on board.

On the start screen, the button must be pressed. This game can be played with any colour button, which is why the button is white at first. Press the button to start the game. 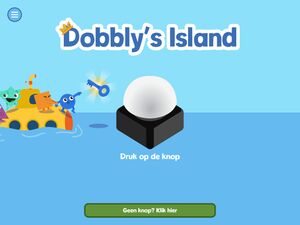 The next screen shows the shared jar with steps. Steps are the "currency" of Dobbly's Island. With this you can: 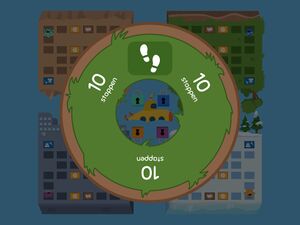 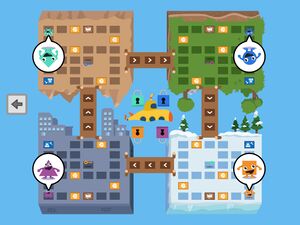 Figure 3: the game board

The shared jar is visible in the screen above. Press the Steps button (with icon of two shoeprints) to continue.

On the game board (see above images, right) the four islands of King Dobbly are visible.

The observant player has noticed that half the screen is upside down. How odd! But don't worry, this is done so that the tablet with the app on it can be placed flat on the table. The intention is that the four players sit around the tablet (instead of behind it), so everyone has a view of the islands. Other action menus will also be rotated to the players for whom it is relevant.

The steps of each player are "paid for" from the common jar. It is therefore important to determine a common strategy, in which everyone can achieve their own goals and the goals of the game. If a player repeatedly chooses for themselves, the player will have to wait for the others at the end (and have nothing left to do). An individual strategy is therefore very boring! 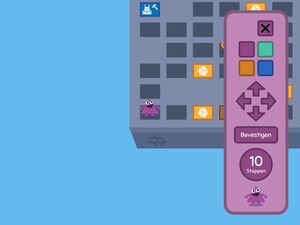 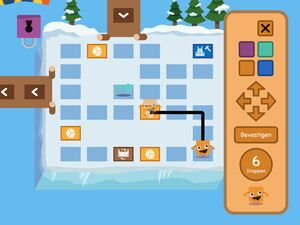 During the game, you play minigames to earn steps. Watch out! After each minigame, the water rises! 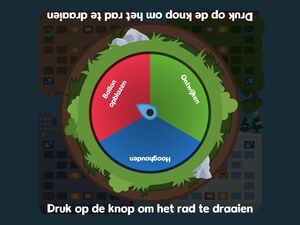